When managing several Varnish instance(s), keeping the configuration coherent between them can be hard. Monitoring and deploying configuration, restarting the instances in a synchronized fashion requires some knowledge. The Varnish Administration Console (VAC) , provides a full API that helps leveraging once difficult tasks.

This post is part of a series of articles. We hope that after this, you can use where we show you how you can use the VAC API to automate you Varnish tasks and improve your workflow.

All the examples are using httpie

We start off by listing the available Varnish instances that are registered in the VAC. This registration is automatic by the Varnish Agent configuration file. info

Listing all the caches registered in VAC

The VAC is running in localhost in port 8080.

The output would be:

We will explain a bit more about the groups further ahead.

Here we get a bit more detail about this particular Varnish instance.

We can see if a panic has occurred, get details about its listening address, and also the list of the VCLs that the Varnish instance is running. At the moment a VCL is in the instance, and the name is boot.

There are some other operations you can do with the API regarding caches, but let's focus on the most relevant for now.

The VAC can get Varnish-specific counters through the API.

The VAC exposes the following counters by default: 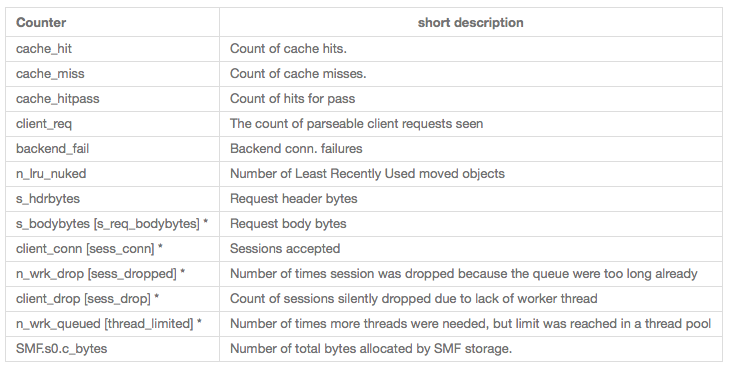 *For compatibility reasons the endpoint uses the v3 name of the counter. [v4 counter for reference in brackets]. More counters can be added in the VAC configuration.

Storing statistical information in the VAC is done using a Round Robin Database (RRD). The existing database will persist the information about the counters.

Let's look into the cache hits, with 5 samples of 2 seconds each or in other words last 10 seconds of time in 2 seconds data points.

In {resolution_per_sample} we specify the interval of the data point we want. By default the VAC has 1, 2, 3, 5 seconds or 1 minute defined.

In {number_of_samples} the number of data samples we want to get of the {resolution_per_sample}. In this case we want to cover 10 seconds and the granularity is a 2 second data point. The output would be:

We are covering 10 seconds and the output is 6 values in order to cover for the 2 second step. If we issue the exact same command but with another {consolfunc}, like max, we get the max value and not the computed average between those points.

In this case the output would be a little different: 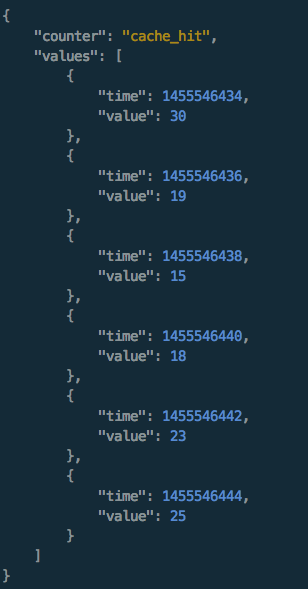 Let's create a new group, and then add a couple of caches to that group. 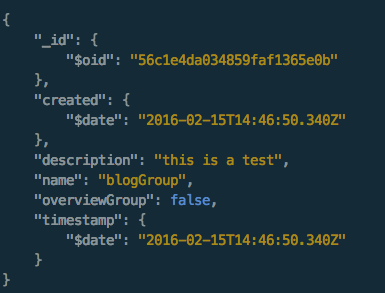 Now that we have created a group, we can give Varnish instance(s) to the group. For that we use the following endpoint:

If you now get the information for that group we see the new Varnish node in the group detail: 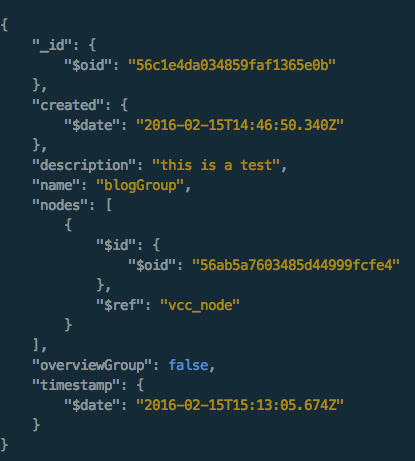 Let's now add another Varnish instance to the same group. Again, this cache needs to be only in one group at the time (VAC will make sure of that), and needs to also be running the same Varnish major version, in this case 4.x.

Adding a new cache we now get 2 Varnish nodes in the same group: 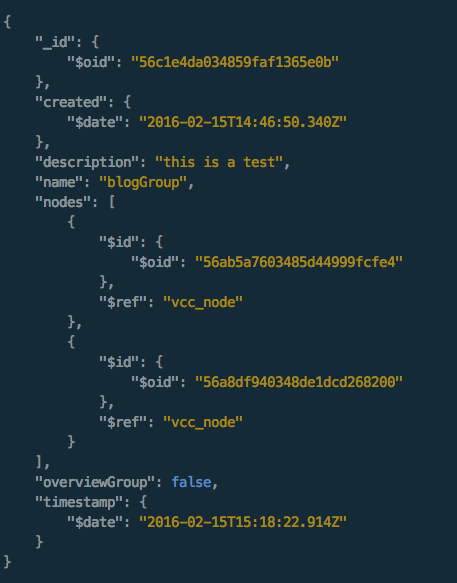 Deploying a VCL to a group of Varnish Instances

Now that things are starting to get interesting, let's deploy the same VCL to both Varnish instances. For that we need to create the VCL first. With the POST body

Now that the VCL is created we need to add content to the VCL. The reason that we issue two different requests is that the VCL content is managed separately. This allows us to have a git like history system on a given VCL.

Initially the VCL will only have a few lines:

We get the VCL detail including the head:true that means this is the tip of your "commits" in the VCL.

Every time you want to update the VCL you can use this method. Let's check the VCL history:

We can see two of the VCL commits:

Notice that the branch is the same, so the "base" VCL is the same but the ID like in a commit ID, changes.

The /head endpoint will give you the current HEAD of the VCL so you get the latest.

At this point the VCL is only known to the VAC and we want to deploy it to our group of two Varnish instances. For that we use one single command.

Let's first check the summary in each of the caches in the group:

We can call the summary throughout the group: 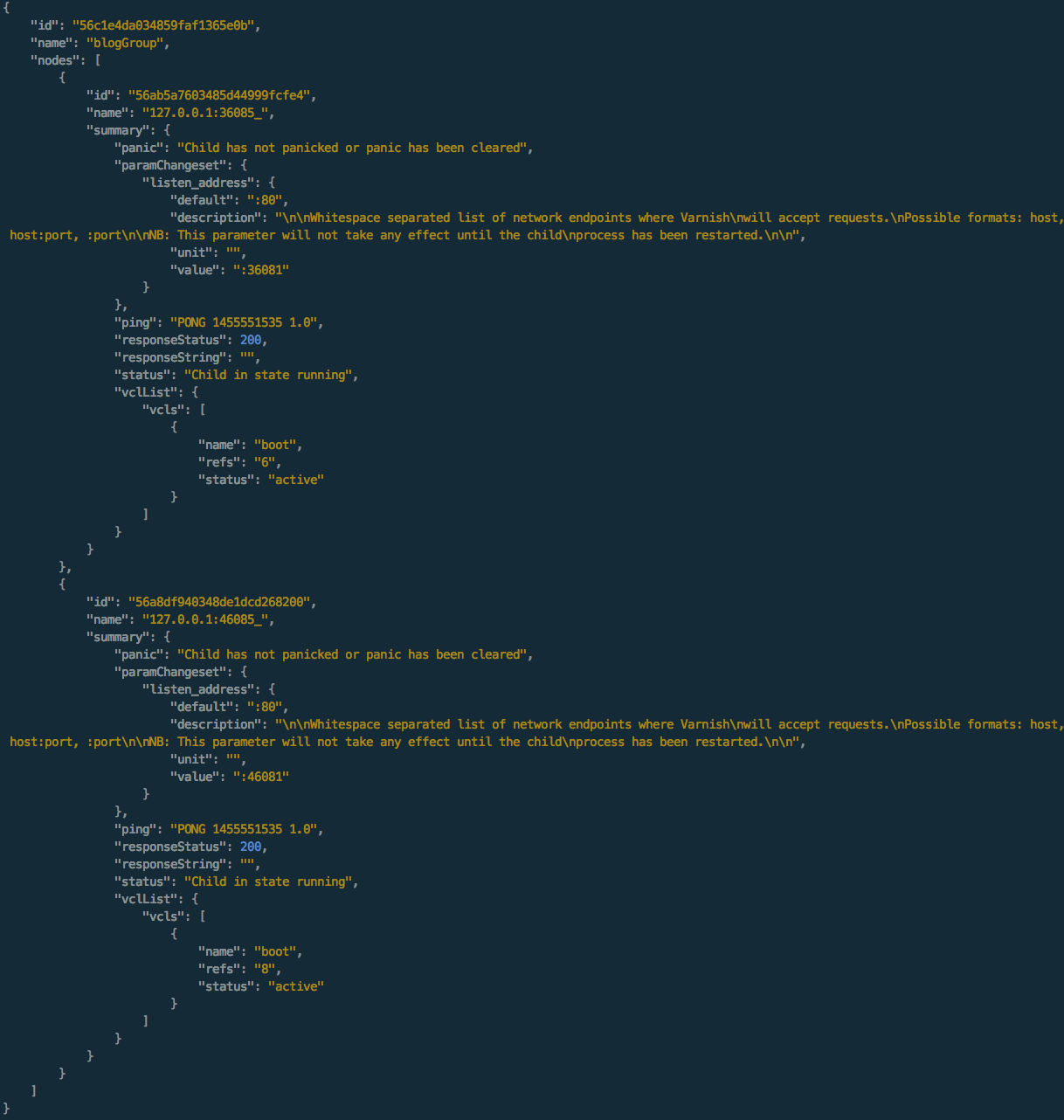 Now, let's deploy the VCL we've just created to the Varnish instances in the group:

In this case the VCL is missing backend definition or directors so although the VCL is deployed the outputs show a message, note the HTTP 400 error.

Let's look into the summary of the group: 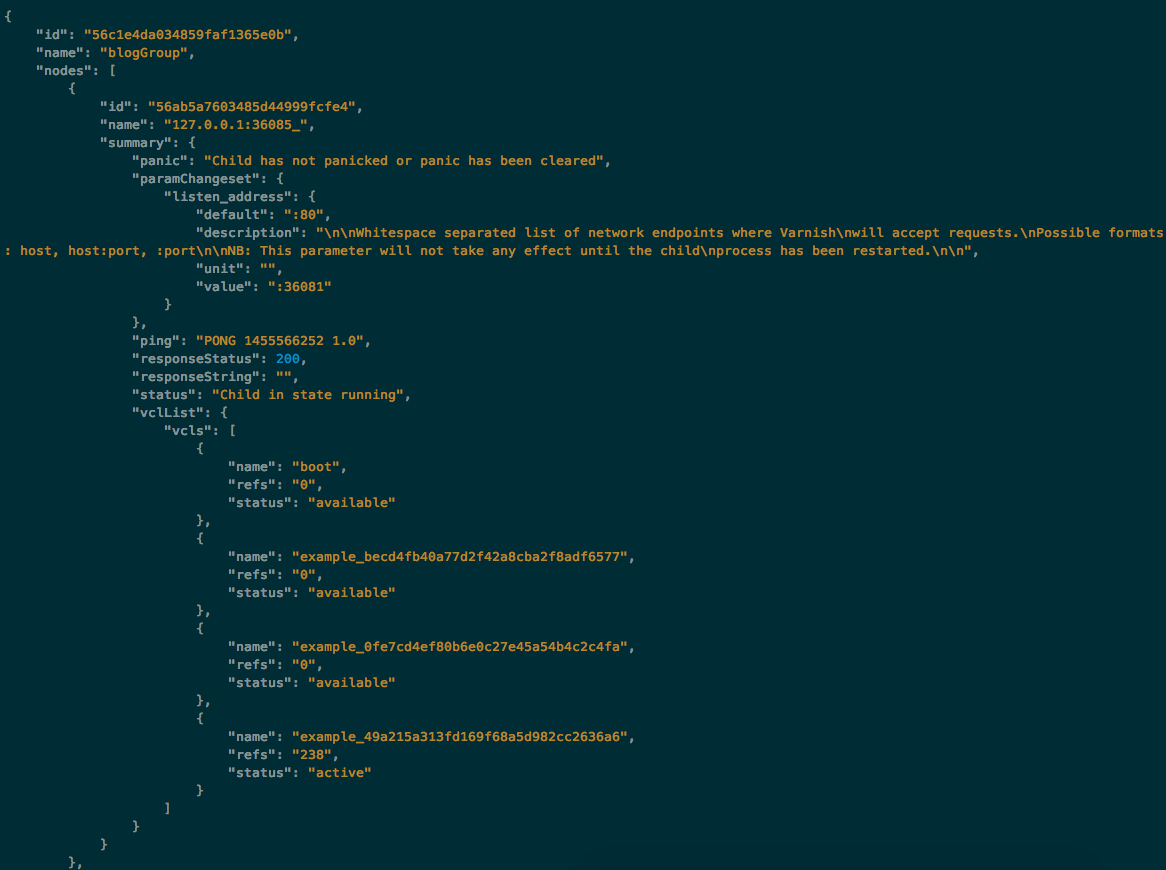 In the VCL group we can see several versions of the VCL example, but one of them active, which corresponds to the HEAD in the VAC.

You can do a lot more

The way you manage a set of parameters in Varnish is somehow similar to this, although in that case we don't keep a history, and only keep the current set, keeping it coherent between multiple instances.

Also, the groups also provide data endpoints, RRD based, like we've shown in the instances. This allows for combined data in a group.

With this post, the goal was to introduce a basic workflow for your Varnish instance(s). We explained the concept of a group, we briefly introduced the statistical approach of the data in the VAC and learned how to deploy and maintain diferrent versions of a VCL in the VAC.

In this blog post we've only covered some of the endpoints and functionality. In the next part, we will go step by step into how to do advanced configuration management with the VAC API and Git.

The Varnish Administration Console is part of the Varnish Plus offering. If you are interested in a trial contact us.