Five reasons why you need an origin shield

Whether you have one CDN or many, an origin shield is a must-have as part of your resilience and risk mitigation strategy. If something goes wrong, the CDN itself can become a DDoS attack on your origin (the whole reason you want origin shielding in the first place!). And, as we’ve learned from recent events that saw half of the internet go offline for 49 minutes, no one can afford to have a single point of failure.

An origin shield guards against the single-point-of-failure bottleneck while also being regarded as a best practice for companies with mission-critical single and multi-CDN deployments. In any kind of CDN setup, origin shielding is about risk tolerance: how much downtime can your business afford? In a 24/7/365 digital world, the answer is probably “none”.

Protect the origin; preserve the uptime

For uncached requests, the origin shield collapses duplicate requests into a single request before fetching it from the origin, which also saves time and increases efficiency while at the same time doing its main job: protecting the origin from being overloaded, and worse, total disaster. 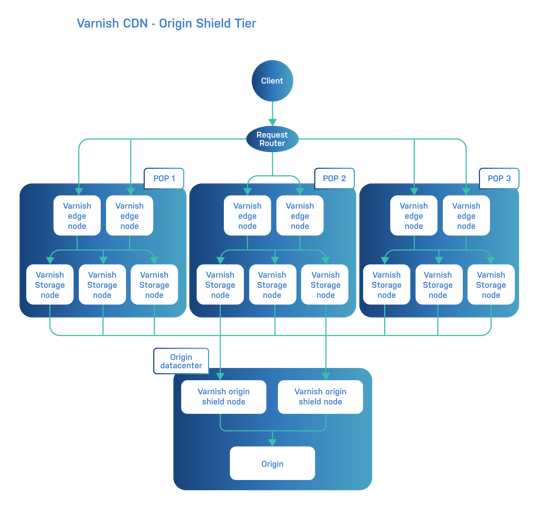 Stop the thundering herd in its tracks: Shield your origin

CDNs are great at doing what they are designed to do. But in the high-stakes, high-performance content delivery environment most companies find themselves in today, they need greater flexibility and redundancy. Sometimes a CDN on its own isn’t enough, and adding more caching is the answer. What does an origin shield offer that can protect backends and performance at the same time?

Origin shielding has gone from a “nice to have” to a critical component in your architecture.

With Varnish Enterprise, you have a partner who will work with you to develop your origin shield based on your specific needs.