Olympic-Sized Scaling Visualized: Are You Ready for a Web Traffic Jam?

We’ve talked a lot about the technical challenges of streaming and broadcasting previous Olympic Games, and how predictions about demand are driving technology forward. We’ve talked about how big names scale up and use Varnish as a key enabler for scalability. As the Rio Olympics draws nearer, though, we realized that nothing seems quite as real as when you make it visual.

We’ve put together the most important and surprising facts and predictions in visual form. It led us to the biggest question: with site traffic for Rio 2016 estimated to peak at 468,000 users per second, are you ready for this kind of Olympic-sized scaling? 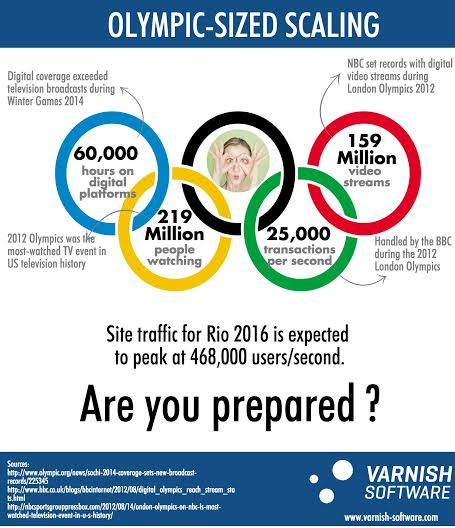 Are you ready for a coat of Varnish on your Olympics preparations? Get in touch to learn more or try out Varnish Plus before the games begin!