There are a lot of ways to look at “cloud gaming” because much of gaming today doesn’t happen without an assist from cloud technology. For the purpose at hand, though, we’re going to define cloud gaming as gaming that mirrors the same way you currently play games… only you don’t need to download a game, buy a physical copy, or use a device (PC, console or phone). Instead, you just need a screen and access to reliable, high-speed internet connectivity. The trick to mass cloud gaming might just be in the proliferation of high-speed internet connections as a replacement for high-end gaming hardware. Until recently, this connectivity could be spotty and inconsistent at best, but this is changing with the widespread rollout of 5G.

Yes, we’re simplifying it somewhat. The key here is that the cloud is picking up the processing slack -- the game itself lives in the cloud, and the cloud is made up of a network of dedicated gaming computers that stand in for all the old hardware traditionally associated with gaming. Have we reached a tipping point where cloud gaming is on par with traditional gaming? No. But we’re getting there, and 5G is going to play a major role in taking the next big steps.

Cloud gaming test: Is it as good as the local experience?

Getting to parity with existing gaming modalities, though, has been a long time in the making. As of May 2020, Sony announced that its PlayStation Now cloud gaming subscription platform had 2.2 million subscribers -- a number that is dwarfed by the estimated 113 million monthly active users of the PlayStation Network (as of June 2020). Cloud gaming is moving forward, as evidenced by the clutch of big players launching cloud gaming subscription services, such as Google Stadia, Nvidia’s GeForce Now, Microsoft’s xCloud and Amazon’s upcoming Luna.

By opening up the cloud floodgates, cloud-based games themselves can become higher performance and more sophisticated, and most importantly for game makers and cloud providers, a lot more people around the globe might be able to access gaming, ensuring continued growth. But cloud-powered video game streaming and cloud-based game subscription services haven’t hit their mainstream heyday yet, as many previous false starts prove. Cloud gaming has a bright future, but it still has some significant clouds to part first.

With the cloud comes rain: Downsides of and tech solutions for growth

We always want more people to join the gaming party, but what happens when the crowd gets too big? From a technical point of view, this means that gameplay resources get stretched: if enough people are trying to play at once, play can slow down or shut down entirely. Hitting capacity ends up leaving a lot of people disappointed, whether or not it’s game playing or live game event streaming.

Just like the internet itself, performance can stall if scalability and performance measures aren’t put in place to manage the crowd. Some of these solutions could include everything from setting up gaming-specific routers to prioritize gaming traffic over other traffic, and more widely, 5G and the distributed edge cloud architecture it enables.

Getting over the hurdle of creating a cloud gaming experience that rivals a console-based game creates complex challenges. When every single action within a game has to be processed in the cloud and transmitted, rendered and relayed back to you and other players within a multiplayer cloud environment, there’s a huge amount of data going back and forth, opening up probable latency issues and packet loss, which are intolerable performance concerns in real-time, live-gaming scenarios.

According to Deloitte, consumers are not resoundingly happy with their existing internet connections and bandwidth. This has become acute during Covid lockdowns, as people turned to their home connections to work, study, stay in touch and get entertainment (often in the form of bandwidth-thirsty video streaming, and increasingly, cloud gaming).

Operators will enter the 5G era facing these challenges, and the possible boom in cloud gaming adoption may be the big test case for satisfying consumer demands, as cloud gaming requires both download and upload capacity and performance.

By leveraging low-latency edge architecture and moving the action closer to the edge of the network, latency becomes a thing of the past. The gains in throughput, speed and reliability create a new edge-cloud gaming paradigm via 5G. The low-latency thresholds also enable other possibilities for e-sports, live e-sports tournaments and sports betting, and other similar use cases with no tolerance for performance lag. 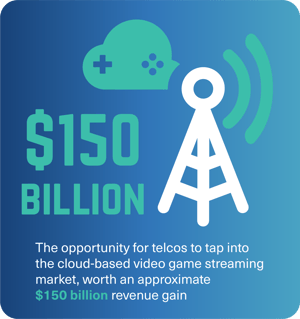 The future of cloud-based video game streaming and subscription services has been staked on the promise of 5G connectivity. Whether this faith is misplaced or not remains to be seen, but the outlook is clear. Cloud gaming is worth a purported USD 150 billion boost in revenue for 5G operators, with a combination of users being willing to shell out more for guaranteed high-performance, low-latency connectivity and unique new cloud gaming subscription opportunities, such as Deutsche Telekom’s bid to become the “Netflix of video games”. 5G offers another way for network operators to become more than just the pipe through which high-value content is delivered.

For telcos, it’s a matter of jumping on the opportunity and being ready for the coming wave of game streaming and online, real-time, interactive play. Cloud gaming platforms are likely to face performance concerns of one kind or another as long as they continue to expand and evolve. But with 5G technologies, focus can shift to what attributes make gaming platforms most compelling to players (e.g., game development, platform exclusives and other content-related concerns).