Just the facts, ma’am: Fact-checking site buckles under demand during US presidential debate

In a US election season that is unusually rich with falsehoods, stories, lies and tall tales, fact checking has practically become a competitive sport. This has never been more true than during the first debate on September 26th between the two candidates, Hillary Clinton and Donald Trump. Suddenly the desire to check the veracity of the candidates’ statements became such a popular pastime that one of the leading fact-checking websites, factcheck.org, experienced significant service interruptions. 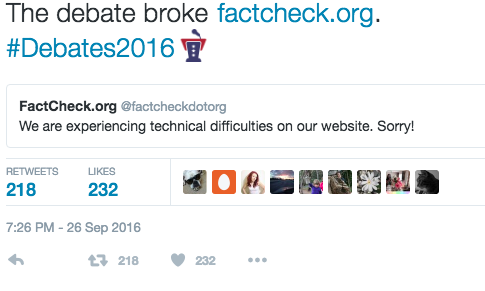 In this election more than any other in history, fact checking has not necessarily been the first priority. Analysis undertaken by POLITICO over the course of one week in mid-September looked at both candidates’ statements to find out exactly how much they lie: hint - one candidate was clocked at one lie every three minutes on average (87 false statements in five days). This analysis may have kickstarted the trend of DIY fact checking. As viewers of the first debate will know, the debate moderators make little effort to fact check or clarify questionable statements. This is where sites like factcheck.org coupled with voter motivation and Twitter converged and jumped into action.

Coming up on, and during, the debate, voters and the media reached a seeming turning point: suddenly, with voting day just around the corner, and two more debates in the interim, the facts matter. And nowhere was that more apparent than in the performance (or failure) of the primary, go-to, non-partisan fact-checking website.

It probably seems a bit like we’re singing the same tune over and over: you can prepare your website for the major rushes of traffic. You don’t have to wait for a debate-night crash or election-night outage to realize that preparing for traffic peaks is not as resource or time consuming as you imagine. You don’t need to invest in new hardware or expand the number of servers working for you. You don’t need major adjustments to your architecture. You need an intelligent caching strategy and policy to manage both regular and peak traffic. That’s where Varnish Plus comes in.

4 ways to put together your website-uptime puzzle:

Before the next debate (Sunday, October 9th), complete your site uptime puzzle and make sure everyone can access and piece together the facts. Read the full CBC case study to find out how they have put together their own puzzle to ensure uptime even in event-driven, peak traffic.

If you have questions or are ready to talk to us about how to secure and scale for high-performance content delivery no matter the traffic demands, get in touch.