Power up: The technology heralding the future of gaming

Gaming is more than just big business -- it has a reach, importance and influence that belies its once niche status. Gaming has overtaken the film and music industries combined in terms of revenue, and has become an entertainment juggernaut -- a true cross-industry moneymaker. Gaming has also been acknowledged not just as a global cultural phenomenon but also as a major of engagement platform. After all, savvy politicians are making their way into the world of Among Us players streaming on Twitch, or hosting potential voters on their island in Animal Crossing. 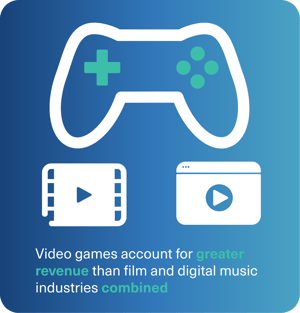 With all of this in mind, it’s important to note that the status quo -- the technology of today -- will soon not be enough to meet the demand in the rapidly exploding gaming sector. What technology backbone and supporting technologies are going to power the uptime, concurrency, speed and latency requirements of high-performance game streaming, for example? For ensuring that even the traditional e-commerce platforms selling gaming consoles don’t crash on a release date? For modulating the gargantuan internet traffic events that online game updates and simultaneous global downloads present?

Let’s look at a real-world case that touches on a number of the technical challenges gaming will face as well as the more sociological aspects of gaming’s influence: the unexpected popularity of the relatively simple game, Among Us.

Although not a new -- or complex -- game, Among Us, a kind of space-age whodunit, caught fire during the 2020 pandemic-related lockdowns during which gaming became a primary source of entertainment for a lot of people. With a simplicity that lowered the barrier to entry, and a PC or mobile interface, Among Us became a sensation. As of mid-November 2020, Among Us had been downloaded 217 million times on mobile. It’s been the most popular download on Steam, Apple and Android all through the latter half of 2020.

During a time when socializing became impossible, the social nature of gaming helped to unite people via in-game communication, and proved even to be a viable engagement platform, as US Congresswomen Alexandria Ocasio-Cortez and Ilhan Omar proved in their live-streamed Among Us stream - engaged with players (and potential voters) in an entirely new way, while urging them to vote in November 2020. In these subtle ways, Twitch, as an example, has evolved to become a kind of social media platform of its own. Naturally technology will need to support this expansive growth from a gaming platform into a gaming and social platform.

It might be aspirational rather than strictly true to say that gaming is real time… it’s striving for the lowest in-game latency possible to enhance the immersive, interactive experience.

The resource intensive nature of gaming has a few faces.

For traditional CDNs, and the internet as a whole, major game launch or update days are events that can create major downtime, slow performance and unhappy gamers. Downloads now comprise massive (100Gb+) amounts of data, which tens of thousands of users are attempting to download concurrently. While many gaming companies run their own gaming-specific CDNs or use commercial CDNs designed to cater to the needs of gaming studios to meet these demands, the resource demand is no less intensive and requires attention and preparation.

On the same theme, cloud gaming/video game streaming using cloud resources is equally resource intensive and careful planning and prioritization of resources to achieve the best possible throughput and latency. 5G innovations may help this considerably.

Gaming is cross-platform and cross-device

Gaming is in another universe compared to its origins, and as such, it’s designed for and accessible across multiple platforms and devices. Mobile is the fastest growing gaming segment with roughly half of the world’s active gamers (1.5 billion people) playing mostly or exclusively on smartphones. Gaming consoles continue to be in-demand as well, which can sometimes throw a monkey wrench into smooth e-commerce operations.

In the e-commerce vein, in-game purchases may be a way to recoup some investment in game development. The hope, of course, is that with smooth, seamless in-game purchases, games can be monetized without affecting game play or user experience.

The future of gaming is complex… and bright

Many factors will contribute to the success of gaming as it continues to grow and evolve. 5G technology promises to be a game changer on many fronts. Many of the challenges listed, from latency to resource use, may be improved or mitigated with 5G rollouts and technology solutions built around 5G’s capabilities.

If you’re ready to learn more…